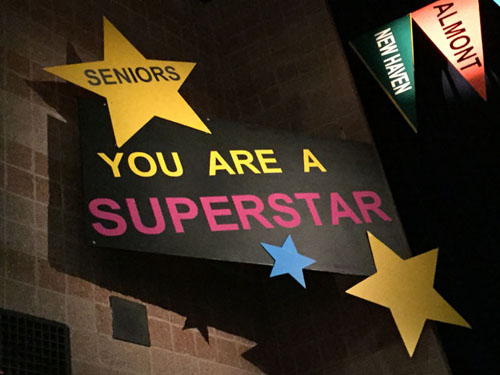 Back in 1999, Dan Wesner of Wesner Tuxedo began hosting an annual fashion show to display the newest prom tuxedos that the company had to offer.  As time went on, more and more high school students began volunteering at Mr. Wesner’s shows and they eventually gave him the idea to highlight all of the accomplishments of high school seniors in Macomb County.

To this day, the Wesner Tuxedo Senior Show consists of over 400 students representing schools from all over the county.  This year, Tower was lucky enough to have multiple members from our Class of 2015 featured in the show.  The seniors in this year’s show include:

Each of our models were chosen to be in the Wesner show because they stand out amongst their peers in one way or another, whether it’s academically, sports-related, or because of their extracurricular activities, such as volunteering or participating in school clubs.  After learning about their backgrounds, Mr. Wesner himself interviewed each of the candidates so he could personally get to know them better.

Mr. Vernengo, social studies teacher, attended one of the six Wesner shows this past weekend and he was very impressed with the students who were chosen to represent Tower.  “I have known this group since I started in Warren Woods and they were just 7th graders.  Although I didn’t have a child of my own in attendance that night, I was as proud as any parent there.  Little old Warren Woods stood that tall amongst some of the biggest schools in the state.  It was amazing to see how they have grown up and become such outstanding leaders in our school,” Mr. Vernengo happily shared.

Although each of these students brought something special to the show, there were a few shining stars who really stood out.  Shelby Klakulak was one of three lucky recipients of a $250 scholarship that she can spend any way that she chooses.  Andrew Zannetti also stood out because of everything that he has achieved over the last four years.  “Mr. Wesner said that he was never more excited to pair two individuals up as he was with Andrew Zannetti and his partner.  He practically stopped the show to showcase Andrew’s accomplishments,” Mr. Vernengo exclaimed.

Overall, each of these seniors makes a great role model in their own way and it was amazing to have them represent our school at such a prestigious event.

*PS – If you are still looking for a tux for prom, Mr. Wesner would be more than happy to help you!