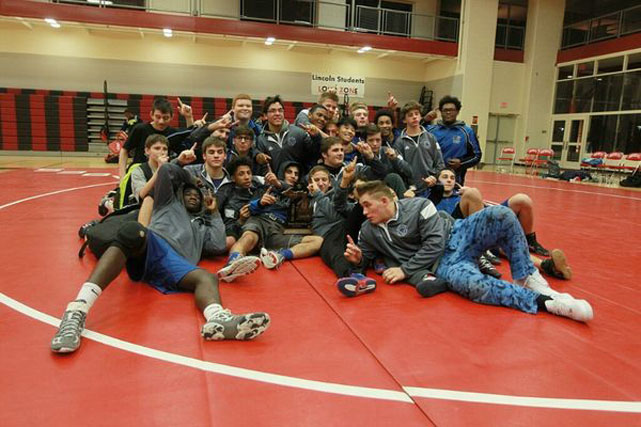 2016-2017 Titan Wrestling Team gathers at the end of the meet to celebrate their MAC Red victory at Romeo High School.

At the beginning of a long season the Titan wrestlers had something to prove. Coming off an unbelievable run to the state finals last season some might have expected a slump season. However, the state finals team was comprised of young athletes that were not going to let the 2017 season be any less thrilling than the previous one. They fought for each match and went 21-0 on the season — earning the prestigious title of MAC Red Champions.

The players are proud of the achievement but know there is still a bigger task ahead. “Although it has been a great run so far the players keep their eyes on one thing – A State Championship Trophy,” Austin Frederick ’18 added.

If you ever wonder what it’s like to be an elite wrestler and the best way to find a answer is to ask the a few of the best in the state. Joey Schindler said, “It takes hard work, dedication, and the ability to want to win.”

“It only takes the mindset of wanting to be the best, after that it’s easy,” Nate Pipes ’17 added.

Many wonder what will happen when this years group of seniors leave, the answer to that is unknown but coaches and players feel very optimistic about the kids that will be returning. Whenever asked about it they all answer, “We will keep working as hard as possible and we will see what the future holds for us.”

Right now all the team is focusing on is the next step and they want and need fan support heading into the playoffs. They open up team districts Wednesday, February 8, at Lincoln High School starting at 5:00 pm.

Coach Greg Mayer said on his Twitter feed that David Stepanian is a “key player to look for into the playoffs after becoming the first Fargo All-American in WWT wrestling history.”

The outlook is strong for a repeat district victory given their record this season including beating the #10 seed Anchor Bay and #4 Dakota whom they could face again at the team state meet if the Titans prevail at the district meet..

They hope to see everyone there as they set to make history and make it all the way to the state team finals.