The Hunger Games vs Battle Royale: A battle of similar concepts 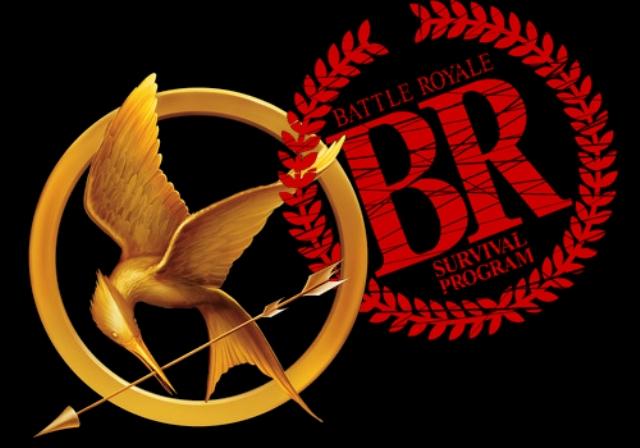 So I’m sure that it’s fairly obvious by now that I’m not the kind of person who is swayed by most pop culture movements. Those who read my review of The Host likely saw my utter disdain for the popularity of Stephanie Meyer and my complete jubilation that her reign over pop culture was finally over. But now a new contender has entered the ring to pull upon the hearts of teenage super fans, with Suzanne Collins’ Hunger Games series. The Hunger Games is the story of a gladiatorial style game of teenagers fighting for survival…wait, have I seen this before? Oh yeah, Battle Royale.

For those who haven’t heard of Battle Royale, it’s basically the same thing that I said with the Hunger Games, except its Japanese, it came out before, and instead of having the kids be random selections, it features children who have known each other for years being forced to kill one another. And Battle Royale is better, but we’ll get to that later.  Now, I’m not going pull the rip off card on Hunger Games like some Battle Royale fans have. Ms. Collins claims to have never even heard of Battle Royale, and being that both the film and the novel that it’s based off of have little more than a cult status in the United States, that’s entirely likely. Plus, Koushun Takami, the author of Battle Royale, takes no gripe with the series and in fact seems glad that others are trying to write stories that take on issues similar to his, so why should I have any issue? However, I still would like to take a little while to compare and contrast these two films with each other, and try to see the similar notes that each of them play, and maybe I can get all of you to think about all the possible ways to think of a story like this when you go see Catching Fire this weekend. …Pluuuus Battle Royale is a gem of amazing filmmaking, and this is pretty much the only chance I’m going to get to be able to talk about some good ol’ Japanese Ultra Violence.

Both of these stories have strangely similar concepts, but there are enough differences between the two for both to be recognized as very much their own things. Hunger Games treats the events as gladiatorial festivals of pride, taking a representative from every district of the empire that this series takes place in, as repentance for an old rebellion against the upper class. The teens are then trained, and sent to go murder each other while the whole country watches. Now while this is a fine approach, I think Battle Royale walked into this one with a bit more gusto: After a massive economic recession, Japan lost all control over their youth, 800,000 students leaving school. In an effort to regain control of the populace and keep apathetic teenagers from plunging the nation into a darker turmoil than before, the Japanese government passed the Millennium Education Reform Act, aka the BR Act, which takes one random class of students and sends them to an uninhabited island in order from them to brutally kill one another off. The students have 3 days to find the victor, or they will all die because of the collars that have been planted upon them on their arrival to the island.

Now, both of their approaches have their issues. The Hunger Games, taking place in the far future, has to develop the world that it takes place and the circumstances of its existence along with the reasoning behind these brutal contests. The former of these Hunger Games does not do well at all. Why is the world like this? What happened that brought the world to such a low level, why has humanity gone back to the days of Roman yore where the publicized death of human life was not only acceptable but applauded? I certainly didn’t see any explanation of that in the movie. It was just a bunch of people staring somewhat   interested at a bunch of kids killing each other, and no real understanding of the universe outside of some vague mentions of district divisions (Note: I seriously don’t care if this was explained in the books or not. I’m reviewing the movie, not the book, and if the movie did a bad job explaining something then it did a bad job explaining something).

However, on the second part of what the film has to do, it succeeds at a much greater level. The film does actually explain why the method of what is basically execution has been chosen to be a gladiatorial showdown. In an effort to better control the masses, give them the hope that they can better themselves and beat the odds, keeping them moving just enough so that can give to the empire, but not enough so that they can be inspired to rebel against the empire yet again. Battle Royale doesn’t quite bother to explain itself and why they let the children take care of killing one another, when it would be more effective for them to just execute the students. Battle Royale unfortunately suffers from this plot hole, and that does weaken the movie to a degree.

However, Battle Royale makes up for this pretty much in whole with the circumstances of its concept. While Hunger Games gladiatorial methods serve their purposes, they lack the pure humanity and horror that come from the methods used in Battle Royale. These students have known one another for their whole life, and are now being forced to murder one another. The film hits a more base and personal instinct than Hunger Games could ever hope to: Yes, it’s well recorded that humans like to watch other humans duke it out, but Battle Royale questions what you would do around those whom you’ve known for ages, whom you’ve called both a friend and an enemy, in a situation that calls for only one of you to survive? Battle Royale shows the brutality of the situation by making these attacks personal- some will kill one another for past gripes or out of the will to try and win, while others will resist all the pressures put upon them, killing only when those pressures have stacked too high, or killed before they even have the chance to change their situation. Battle Royale bothers to explore its premise and the bare human nature that would surround such a event, something I saw very little of in the Hunger Games adaptation.

One of the most impressive feats of Battle Royale is its ability to manage a massive cast. There are well over 40 characters in this film, each of them playing some kind of role in the main events. Characters like the courageous but somewhat inept Nanahara, the near angelic Noriko, the psychotic Mitsuko, the nearly devoid of human thought Kiriyama, the heroic but jaded Kawada, and the lonely and deranged teacher and main operator the program Kitano, who may be one of my favorite film villains. None of the characters, with perhaps the exception of Mitsuko and Kitano, quite go into a range of massive complexity, but they deliver on the fact that they feel reasonably human, and have at least some attribute that can be understood or related to. They work as basic characters, who even though you may not remember each member of the cast, you remember the roles each played, and the arcs that the main characters achieve.

As for the Hunger Games- Well, there’s Katniss….and Peeta….and Woody Harrelson…..and there was that women with the Helena Bonham Carter hair…..did I say Katniss already? …yeah, I can’t remember ANYONE from this movie. There was no one with any notable character or personality that I end up caring about, because the movie never gave me a reason to. The villainous group that Katniss was facing off with left no notable presence, the supporting cast was just kind of there, and we’re just supposed to accept that Katniss is a grand protagonist who can carry the whole film. So surely she’s able to, right? Well, let me bunker down and get some armor on while I prepare to answer that.

Katniss is a noble and daring heroine who selfless nature makes her a respectable character, who is certainly a more bearable character than those in the ilk of Bella Swann. That being said- I have never seen a character quite as bland as her. She doesn’t have anything particularly interesting about her- she sacrificed herself to the possibility of death to keep her younger sister from having to go to the games, but she has no interesting flaws or issues or ambitions, she’s just a girl who’s good at using a bow and arrow, and even that’s not explained particularly well. By her lack of engaging personality or character, I have no concern, and am just completely apathetic by the time she actually does anything. I just don’t know who Katniss is, and why I should care, which is never a good sign for your main character.

Battle Royale is a well filmed and well structured film that is beautifully shot, with great performances from each of the actors, its visual style helps to create the bleak nature that the film wishes, and uses great sets and practical effects. It manages to do this on a budget of the equivalent of $3.5 million. Keep that in mind.

The Hunger Games has an excessive use of shaky cam, is acted as blandly as a Folger’s commercial, and uses some of the fakest CGI I’ve ever seen in a film. It is just an ugly looking film, and I don’t think it was an artistic choice. So, bad acting, bad cinematography, and bad effects- and this was done on a budget of $78 million.

Listen, I’m obviously biased here , but that’s only because Battle Royale is a smarter film, and one that doesn’t exist for the sole purpose of setting up for what should probably be better movies. Is Hunger Games bad? …yes. Yes it is. But it certainly shows the potential for not being bad, so I suppose that’s something. But yeah, I’m going to stick with Battle Royale for my war games fix. I would like to suggest to you to check Battle Royale out though. Its far more violent than Hunger Games, but the impact of what it’s about hits so much harder because of this. And hopefully soon I’ll be able to see if Catching Fire makes Ms. Collins’ come closer to the quality of the adaptation of Takami-san’s novel. At the very least, it should be a better sequel than Battle Royale’s….that certainly wouldn’t be difficult *shudder*

-Premise can occasionally make no sense