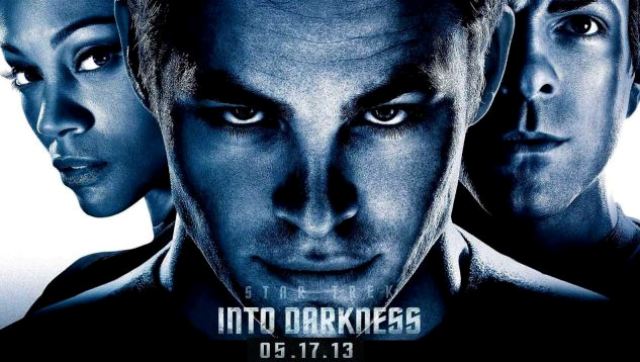 The continuing popularity of the Star Trek franchise, a series that of which I am a considerable fan of, is due to many enduring elements throughout its existence, including engaging character, interesting settings, and deep, thoughtful underlying themes. But perhaps it is due more to one element more than any of those three- that being the franchises drive to push science fiction in new, bold directions, and discover new ways to tell great stories, embodying the explorative spirit that the starship Enterprise herself has come to represent. By that virtue alone, “Star Trek Into Darkness” should be considered as one of the low tier Star Trek movies, as instead of pushing Trek into new, unmarked storytelling ground, it shamelessly retreads quite possibly the franchise’s most popular adventure (the title of which I will not say because it seems the production staff was absolutely obsessed with keeping this a secret, but I will offer a hint: “ANGRYSHOUTOFVILLANSNAME!!! ANGRYSHOUTOFVILLANSNAME!”). However, SHOULD is a very key word. By all means, “Star Trek into Darkness” should not work in any way. But, despite its shameless retreading, J.J Abrams second Trek adventure is a thoroughly engaging, interesting, and fun film, and I may consider it one of my favorite Star Trek movies.

“Into Darkness” tells the further adventures of the Enterprise crew in the alternate Trek universe, as Captain James T. Kirk, played by a much improved from last time Chris Pine, is put on a mission by Admiral Marcus to hunt down the terrorist John Harrison, played by Benedict Cumberpatch, who has escaped to the Klingon home world Kronos (Trekkie Note: the proper spelling is Qo’noS, something that this film does not recognize. Sorry, but there are  a few things that Romulans with a grudge against Leonard Nimoy changing the timeline can’t  get away with altering). Though it soon becomes apparent that there is more to John Harrison than is originally expected, as his true identity as a familiar Trek figure is revealed.

The story is rather well written for the first few acts. There is a feeling of true drama to the terrorist acts that Harrison initiates, the ways that he gains spite from Kirk, and how the movie plays him up as a menacing force, and showing how Star Fleet, the Enterprise crew, and occasionally how all future civilization, reacts to such a force. The film nearly borders on intelligent, but all that is unfortunately lost when the movie decides to explode into a fit of blatant fan service and over the top action, which while still entertaining; it’s kind of more hilarious than engaging, and makes the movie lose all the potential that it had to be one of Trek’s greatest adventures. Like I stated earlier, the retreading of Star Trek’s most well-known story makes this film seem lazy, and if it were any less entertaining, it almost certainly would have broken the film.

However, the movie maintains excellent characterizations throughout the film, doing a great job of showing Kirk as a maturing officer, presenting the dual natures of Spock, and giving traditionally bland background characters like Chekov, Sulu, and Scotty a lot to do throughout the film. Characters like Uhura and Kirk who came off as obnoxious and annoying in the previous Trek film have become far more grounded and feel like actual characters rather than arrogant mouths. This characterization is heightened even further with very clever and well written dialogue.

Of course, the characters are only presented so well because of fantastic performances from the entirety of the cast. Chris Pine actually feels like he’s playing Captain Kirk in this movie and not just some arrogant dolt in a Starfleet uniform like last time, Zachary Quinto gives another excellent performance as the logical and stoic Half Vulcan Spock, keeping in the spirit of the great Leonard Nimoy while still bringing a unique youth and intensity to the role. Simon Pegg is hilarious as the chief engineer Scotty, Anton Yelchin is equally funny as Chekov, John Cho is…..present as Sulu (Trekkie Note: Admittedly,  Cho’s Sulu does get a good moment , but it’s mostly a joke at the expense of the original Sulu actor George Takei and his attempts to get a spin off about his character, so it comes off as a tad cruel in that context).  And Zoe Saldana gives a brilliant performance as Uhura, giving her emotion and personality that the original Uhura tended to lack. But the highlight of the film is Benedict Cumberpatch as the mystery villain. Though not quite as good as the previous actor to hold this role, Cumberpatch is menacing and powerful, giving more stage presence than any other actor on the set. He’s charismatic, intimidating, and looks completely natural doing everything he has to do on set. He’s even able to make some dumb cliché’s, like the obligatory villain gets captured moment, the film decides to use look awesome, and completely owns the role (Trekkie Note: Even if he’s not the right nationality to play the role….ugh).

While Into Darkness is mixed in the more substantial areas of the film, it is a gem of technical expertise. The choreography for the action scenes is absolutely perfect, being intense and attention grabbing, even if they tend to cross the line of subtlety. The special effects used to bring the actions to life look extraordinary, and again, I thank whoever on the production staff realized that CG and practical effects can work together to make something that looks absolutely fantastic. The score by Michael Giacchino is very well composed, and sets the atmosphere of the film perfectly (Trekkie Note: But I will be honest, it was weird seeing the sweeping beauty shots of the Enterprise and not hearing Jerry Goldsmith’s Star Trek movie theme).

The artist in me wants to berate this movie to its core, calling it shallow, hollow, and contemptible. And in many ways, its lack of originality and respect for what a series stands for makes it that way. But as a critic, I cannot help but adore this movie. It has all the engaging characterization and fun adventures that were featured in the original series, and in many ways, this is the closest thing to a true and good Trek film we’ve gotten in years. So I suppose that this can sate the fandom until Paramount gets around to finally bringing  Star Trek back to the small screen where it thrives.  Hopefully by 2016, the 50th anniversary of the series, fans will get a film as exciting and entertaining as this one that can still push into the original and bold new places that the original shows and films so often tried to venture to.