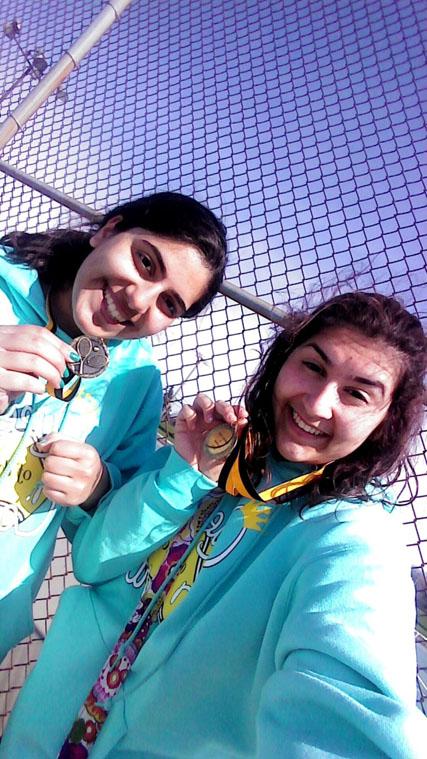 On the sunny morning of Saturday, April 25, the girls varsity tennis team woke up bright and early to participate in the Sterling Heights Tennis Tournament.  The tournament was held at Tower’s tennis courts and across the street at Macomb’s tennis courts.  The schools who participated in the tournament were Sterling Heights, Utica Ford, Cross Lex, and Tower.  Those who participated in the event played in a singles or a doubles match.

Even though all of the girls from Tower had to play three matches, the doubles team of Jessica Hanna ’15 and Natalie Shamoon ’15 really stole the show.  “We play second doubles and most of the teams that we played were at our level.  I remember one game we lost our first set, shook it off and came back to win our second set and the tiebreaker.  We ended up placing first out of all four schools in second doubles,” Jessica said.

It takes two to make a thing go right, which is why both of the girls had to work together in order to succeed.  “Playing with Natalie is a trip, but a very fun one.  We are both able to make mistakes and laugh them off and that’s what I think keeps us from getting upset with ourselves and one another,” Jessica said.  In the end, all of this cooperation paid off big time.  “Last year I placed third at the tournament and this year I wanted to go home with the gold.  To actually win the medal and to do it with one of my best friends felt amazing!” Jessica added.

The chemistry between these teammates was evident to Natalie as well.  “Getting to play with Jessica was awesome.  I played with her our freshman year, so having coach place us together this year was the right choice because we balance each other out really well and we have a lot of fun as opposed to stressing each other out,” Natalie said.  The outcome of the match was also a highlight in Natalie’s tennis career.  “Last year I played singles and got second place, but winning first place with my partner this year was great,” Natalie added.

Not only were Natalie and Jessica happy with the outcome of the match, but they also received a lot of support from their fellow teammates.  “Our whole team was so proud of us, but most importantly, our coach was grinning from ear to ear,” Jessica said.

Overall, both Natalie and Jessica were happy with the way their match played out and they loved the fact that they were able to enjoy this special day with one another.