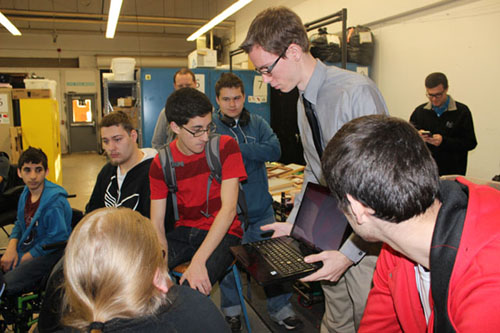 Here at Warren Woods Tower, students who are interested in having a career in computer programming have the opportunity to take a programming class and get a head start on their future.  Although these students spend every day in the computer lab, some of them have gotten a chance to apply everything that they have learned within our community.  Since the beginning of the school year, Chris Thompson ‘15 has been one of these lucky students.

Back in September, our school’s Occupational Therapists Michele Morgan and Debb Carlton approached Tom Dembinski, math teacher, about having one of his programming students help them out with the newest addition to their fish tanks.  “This project started with a grant from Voya Financial to automate our aquaponics system so the water quality of the tanks could be managed off-site and we could view the fish from anywhere in the district,” Morgan said.

Over the last 6 months, Chris has spent his first hour class in room 416 every Tuesday and Thursday in order to work on an arduino for the aquaponics system.  “An arduino is a small computer used for different gadgets.  In this case, the arduino will be used to measure the temperature and pH levels in the fish tanks,” Chris commented.  And what’s Chris’s favorite part of the arduino?  “It was very inexpensive.  Other computers this size are usually around $300 but I only spent about $150,” Chris added.

Not only will Chris’s program keep track of the fish tanks’ temperatures and pH levels, but it is also hooked up to a camera that will offer live stream footage of the tanks that can be accessed from any computer.  “This is a great addition to the system because I will be able to check up on the fish whenever I’m not around.  Then, if something is wrong with one of the fish, I can get to the school right away and check up on them,” Morgan said.

As Chris has been developing this program, some of the students from the POHI department have been assisting him and they really enjoyed the experience.  Austin Baker ’16 said, “I though it was really cool and I want to work with the arduinos again.  I learned how to use the language of python.  I didn’t know that was how some video games were built.”  Michael Roscoe ’17 also added, “I didn’t know you could do so many things with such small parts.  It was very cool.”

Today (April 2nd), Chris presented his program to some of the POHI students, our technical engineers, and his fellow programming peers.  He will also be giving another presentation during sixth hour later today.  Mr. Dembinski, Chris’s programming teacher, was very proud of him.  “Chris was the perfect student to work with the special education department.  He really used his knowledge of computer programming and hardware to help its students.  We are now planning to have more students collaborate with the special education department in the future in order to create new projects,” Dembinski commented.

Overall, Chris’s endeavors have proved that a little bit of hard work can go a long way and his creation will now benefit the future of the POHI department for years to come.