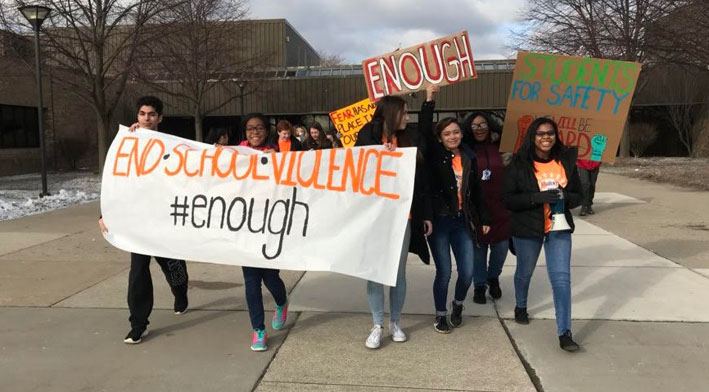 Titans are standing together to protect the community of Warren Woods as a group of students came together to establish the new group ‘Students for Safety.’ Among recent tragedies of school violence throughout the nation, Titans are communicating that enough is enough. Students for Safety’s primary goal is to promote that in order to protect ourselves we must protect our school, ultimately providing a ‘positive and all-inclusive’ environment.

“The goal of Students for Safety is to make people aware of school violence, and that it needs to end. Too many people are suffering because of it,” Jada Jenkins ‘18 stated.

The vast amount of tragedies that have swept the nation have caused an infliction on society creating a fear that resonates with many. This group hopes to converse that a place designated for education should exemplify a safe environment as well. As the number of tragedies have went up over this new year, students of WWT approached history teacher, Mr. Henshaw to help innovate this new club. Students for Safety now devote their Tuesday evenings implementing new projects among the school to create a safe environment.

Recent projects they have tackled include the selling of the non-profitable shirts they designed to be worn during the National 17 minute school walkout that was organized for March 14th, marking one month from the Parkland, Florida school shooting at Marjory Stoneman Douglas High. The turnout of this walkout was at large, as the sidewalks were filled with many students that participated in the walkout by choice. Everyone gathered at the bleachers in the football field where a few members from Students for Safety prepared speeches.

Vinny Jurban ‘18 began by asking for 17 seconds of silence following his speech to pay respects to those 17 lives that were lost. Serina Berisha ‘19 provided brief descriptions behind those same lives, creating in the students minds a person behind the many faces of the victims they have seen on the news. Ariel Bennett ’20 stressed the importance of the walkout, stating that it was not a short break from classes, to which students agreed. Bianca Elizando ’18 shared the importance of making the school a positive and all-inclusive environment.

The 17 minute walkout concluded with Students for Safety asking for everyone to reach out to 17 new people within the next few days, stressing the impact this could have on the community for years to come.

Students for Safety currently meets every Tuesday to discuss what else could be done to make WWT a welcoming and safe environment for all students and staff.

If you are interested in joining Students for Safety text @s4safety to 81010 to join the remind, or follow them on twitter @student4safety to know when their next meetings are. The group meets every Tuesday after school in Mr. Henshaw’s room.