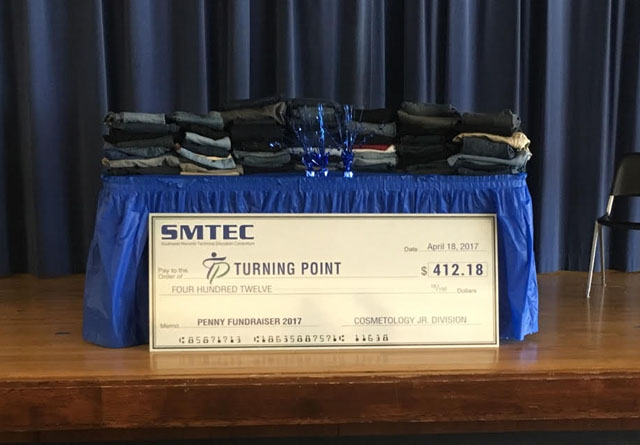 On April 18th, WWT Junior Division Cosmetology girls handed over a check to Turning Point. Turning Point is a non-profit organization that has been around for many many years. To be exact since 1980. It has help over thousands of men, women, and children who have been sexually assaulted and/or domestically abused.

The girls in early March decided that they were going to raise money and have a penny war. The penny war lasted until the last day in March and they raised $412.18 within three classes of 18 girls each.  Through out that month each class would have a blast for every dollar or sliver coin it was a negative number for the amount of pennies you had in the jar.

“It was a blast, at first I didn’t think it was going to be that much fun but in the end I’m glad I participated,” said Victoria Shultz (’18). Every single girl at least brought in a penny and donated some kind of money to their class jar.

Turning point offers many things to help out those victims. They have a thrift store where the victims can shop for free, they have a shelter for those who are in need of a safe place, there is a crisis line open 24/7, and the have programs that come and educate the people.

Turning point last year helped over 30,000 people, had 503 women and children in the shelter, and over 12,000 calls to the crisis line. Every September they also do an annual walk downtown.

Did you know statistically women who are abused won’t leave for good until after the eighth time and that every one to four people are sexually assaulted or domestically abused??? That’s Crazyy!!! Turning Point is a Macomb County Organization and the Junior Division really helped!