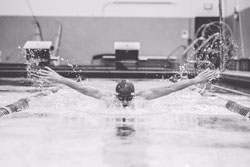 Being a swimmer takes a lot of hard work and dedication, as does any sport, but Jeffrey Pokriefka ’16 has been working since freshman year on improving his swimming skills to make it to the top.

Regular season is very competitive. “Individually the season went pretty well. As a team it was kind of rough, but we supported each other through all of it. But it was a good season for me. I did pretty well at counties and I finished first at a lot of the dual meets. I got 8th place in the county for butterfly and 2nd in the division,” explains Jeff Pokriefka ’16.

Young athletes usually have someone they look up to or someone who motivates them to do their best. “A lot of people motivate me especially my coaches Tori and Gage. The team does a great job at getting each other motivated. Finally, my father always pushed me to do my best in swim and has supported me with it a lot the last 4 years,” Jeff added.

“This season I improved quite a bit more than previous years. I qualified for counties for every event I swam and I qualified for MISCAs in a couple events where as last year I only qualified for one. Also this year is the first time I qualified for states,” Jeff remarked. The more time you spend working on your skills, the more you will improve as Jeff has proven. For 4 years he has worked to qualify for states and he succeeded.

Jeff is also a little superstitious. Before meets he listens to the same playlist on his phone to get him in the zone before he goes to the blocks. Who knows maybe this playlist really is good luck for him.

This swimmer has worked extra hard to be great. “After the normal season ended I just kept on practicing, but over with the boys state team at Fraser so I could have someone to swim with,” Jeff said.

The week before states Jeff was home sick. But that didn’t stop him from going to states and swimming his heart out. He overcame the obstacles he faced and came out on the other side proud. “States went better than expected. I thought I would do terribly, because of being sick the week before it, but it actually went well. I was close to my usual time and placed 34th in the state,” Jeff explained.

Not only has Jeff proved that he is an amazing swimmer to Tower, but he has also proved it to himself. All athletes can relate to this. Hard work and dedication is what makes things happen. Jeff didn’t just join the swim team expecting to make it to states, he put his heart into the sport and it definitely got him far.