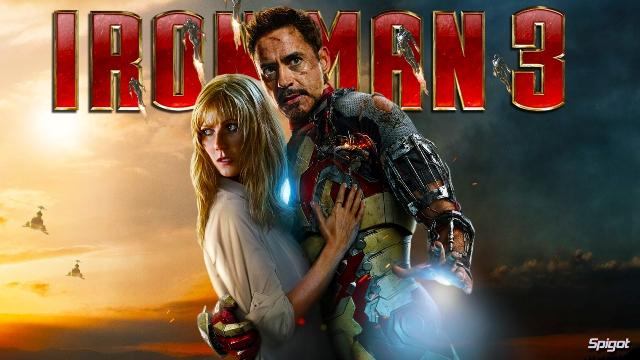 The Marvel Cinematic Universe has produced some of the most intriguing comic films of the last 20 years. Ever since Marvel started their own film studio, they have been producing hit after hit, beginning with absolutely fantastic Iron Man and ending the first echelon of these films the cinematic masterpiece The Avengers. All of these films have offered the best adaptations of comic books of the 2000s and the current decade (“What about the Christopher Nolan Batman films?!?!?”….what about them? They’re overrated).

Iron Man 3 begins the next wave of these films, and some have been rather speculative towards the idea of whether the next group of movies building up to the Avengers 2 can match the brilliance of the previous. And this critic is glad to say that not only does Iron Man 3 leave a promising feeling for this next wave to match the quality of the previous, it leaves the excitement that this generation will by and large surpass it.

Iron Man 3 takes place immediately after the events of the Avengers. Tony Stark, eccentric billionaire and alter ego of the Iron Man, has been suffering from anxiety since his near death experience when fighting the Chitauri at the end of The Avengers, and hasn’t been able to sleep, doing nothing but tinkering with his suits as his relationship with his friend James Rhodes, the bearer of the Americanized War Machine suit now donned Iron Patriot, and his girlfriend Pepper Potts fall apart. As this occurs, a terrorist known as the Mandarin begins to cause chaos across the world with America as his primary target, using people as makeshift bombs with a strange drug called Extremis. When the Mandarin attacks Tony’s home, Tony crash lands in Tennessee, and his suit is broken, so he must find a way to stop the Mandarin with limited access to his trademark armor.

Despite restricting Tony from the suit that made him famous, this story is very well crafted. By bringing the focus on to Tony Stark rather than Iron Man, the story becomes deeply personal, watching as Stark struggles throughout the movie to make everything right, while dealing with his inadequacy of mere humanity having facing off with Nordic Gods and super soldiers in the Avengers, and proving that that the man makes the man, and not the suit he wears. This is helped by several twists and turns that give the story a very epic and wide scope. The story is thematically brilliant, and is by far the strongest of all the Marvel films.

The story is carried by great characters, ranging from returning cast from the previous Iron Man films, and new additions. Robert Downey Jr.’s Tony Stark is as charming a jerk as ever, but manages to show more humanity than in any of his previous iterations. Don Cheadle finally fits the role perfectly as James Rhodes both in and out of the War Machine suit, something that troubled him in Iron Man 2 and Gwyneth Paltrow gives a performance as Pepper Potts, getting possibly some of the best moments in the entire movie. Ben Kingsley’s performance as the menacing Mandarin is extremely memorable, as is Guy Pearce as the very jerkish and egotistical Aldrich Killian. However, I can not dwell for too long on the villains of the film, as to do that would require me to give away details of the film that no decent critic would dispose. Simply put, these characters help to give support and life to what is a great cinematic story.

In the realm of technical ascpects, Iron Man 3 doesn’t transcend the near flawless cinematography of the Avengers, but it succeeds for the film that it is. The action scenes, both involving and not involving the suit, are intense, wild, and exciting. The special effects are very well done, every CG iron suit looking very unique and stylized, and  many of the effects involving Extremis look horrifying and mystifying, as must have been the intention. Brian Tyler’s soundtrack is magnificent here, setting the atmosphere perfectly. And I must thank everyone involved with this film for toning down the rock anthems that were all over the previous Iron Man movies. I love AC/DC, but two movies of hearing songs from their Back in Black album gets old after a while.

Iron Man 3 does have its share of flaws. It is very weirdly paced near the beginning, dumping the information of the story quickly and very book like, trying to explain the events without letting the audience really experience it. However, the film quickly grows out of this as the story picks up, and the viewer is allowed to experience the film naturally. The script suffers from the occasional plot hole, but it never brings the film down in any fashion, and they can be easily overlooked. There is a possibility that two aspects of the movie will hamper your enjoyment: 1. Tony Stark is only in the suit for about a total third of the film and 2. There is a twist that you will either adore or abhor. However, both of these aspects to this critic were very good points to the movie, the lack of the suit making the story more human, and the twist making the film much more interesting.

In conclusion, Iron Man 3 is a satisfying beginning to the next wave of Marvel films. Though it is flawed in some places, it is a strong story and character piece, with great performances throughout. Iron Man 3 is highly recommended, and I cannot wait to see Tony Stark back in action for the next Avengers.