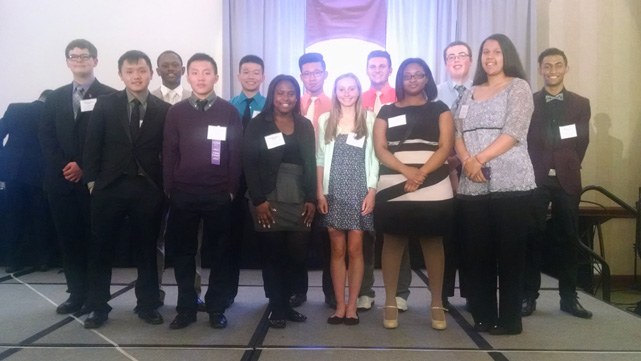 Over this past weekend (Thursday, April 16 – Saturday, April 18), a group of our very own HOSA students traveled to Traverse City to participate in the state of Michigan’s annual HOSA Leadership Conference.

This special conference consists of 56 different events that require HOSA students to apply the knowledge and skills that they have learned throughout all of their courses to real life situations.  The HOSA program offers many different medical-related classes, such as nutrition, vet tech, surgical tech, nursing, and dental, so there were multiple events for each field.  Any student who received a high enough score at their regional competition was eligible to compete at the state level, which ended up being around 2300 students.  “The amount of people that were there was ridiculous.  I had to stay in a different hotel than the rest of the students from Tower because there’s was booked,” Noah Hartson ’15 shared.

Over the course of these three days, each student either took a test or participated in a hands-on demonstration in order to show their knowledge of their desired occupational field.  Once everyone’s scores were calculated, the top 8 students for each event were called onto a stage to be recognized for their accomplishments.  Then, the students who came in first, second, and third place were given medals.  “I came in ninth for my event, so I was very close to getting called on stage!” Noah mentioned.

While Noah came so close to being called on stage, there was one Tower student who not only got called up on stage but also received a medal.  As it turns out, Alyson Linton ’15 came in first place for her Transcultural Healthcare knowledge test!  When she was called onto the stage to accept her award, however, it did not play out the way she thought it would.  “My award actually got mixed up with someone else’s, so I originally thought I won bronze but it turned out to be gold.  I was confused at first, but then I was happy,” Alyson shared.  As a first place winner, Alyson will now be competing in the national HOSA competition in mid-June.

Even though we didn’t have as many students place high enough in their events, each of them gave it there all throughout the whole weekend and they deserve to be commended for their achievements.