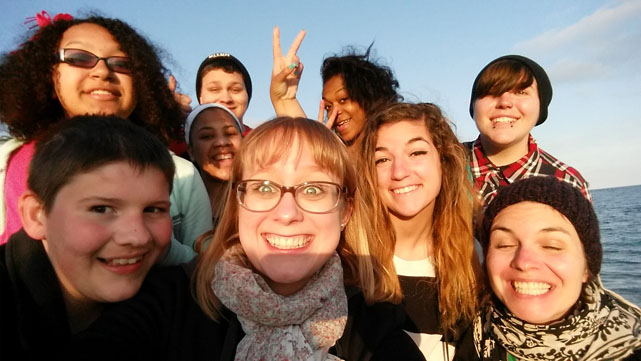 While many students here at Tower spent their Spring Break in Florida or stayed back in Michigan, Ms. Rydant, French teacher, took six of her students (Joe Bonga ’18, Ryan Daniel ’18, Jade Amalio ’17, Angel Alexander ’16, Dana Lashley ’16, and Kahla Burse ’16) to France to take part in the French Language Immersion Tour of Nice.

The French students went to the airport late on the night of April 2nd, flew overnight, and arrived in Paris the next day.  For the next two days, they visited some of the biggest landmarks within the City of Lights, including Notre Dame, the Louvre (home of the Mona Lisa and Venus de Milo), and the Eiffel Tower.  Once they arrived in Nice on April 6th, however, they didn’t do as much sight seeing as they did in Paris.  “We went on the Immersion Tour because I wanted the students to take everything they learned in class and apply it to the real world.  For example, we went to a market one day and they all had to speak French whenever they asked for something,” Ms. Rydant said.

Not only did the students use their speaking skills, but they also participated in some common French activities, such as taking a cooking class, making pottery, and playing the popular game of pétanque.  The students also took a few classes at EF’s International Language School to learn more about the French language.  “I really wanted them to experience the French culture while we were there,” Ms. Rydant added.

As it turns out, Ms. Rydant’s desire was fulfilled – her students ended up having a great time in France!  “My favorite part was going to the Monaco because it was such a huge church with a lot of lights.  I also liked seeing the Eiffel Tower.  It was a really fun trip,” Ryan Daniel said.  And what did he notice about the French culture?  “Their culture was a lot different than ours.  One thing I noticed is that they walked more than they drove,” Ryan added.

Overall, the French students had the time of their lives and this is a trip that they will never forget.

*PS – If you are a French student and you didn’t get the opportunity to attend this year’s trip, do not fear!  Ms. Rydant is currently planning to go back for Spring Break 2017.